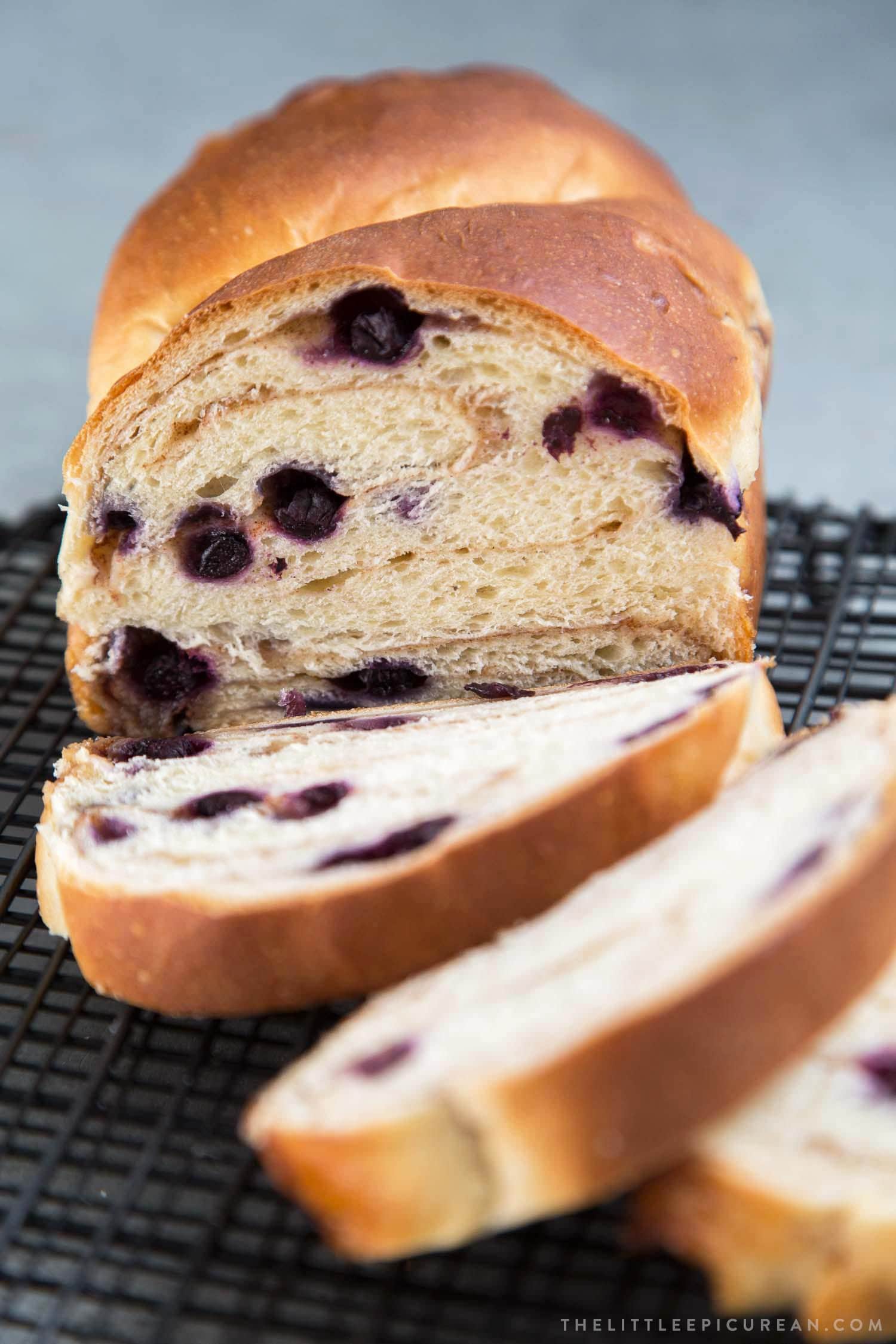 The word banana bread conjures up a sweet and fragrant quick bread loaf often studded with toasted walnuts or chocolate chips. It is known for being a moist, almost cake-like bread made with the ripest of bananas.

But what if you want a banana bread that’s fluffier and lighter in texture? You experiment with a banana yeast bread! 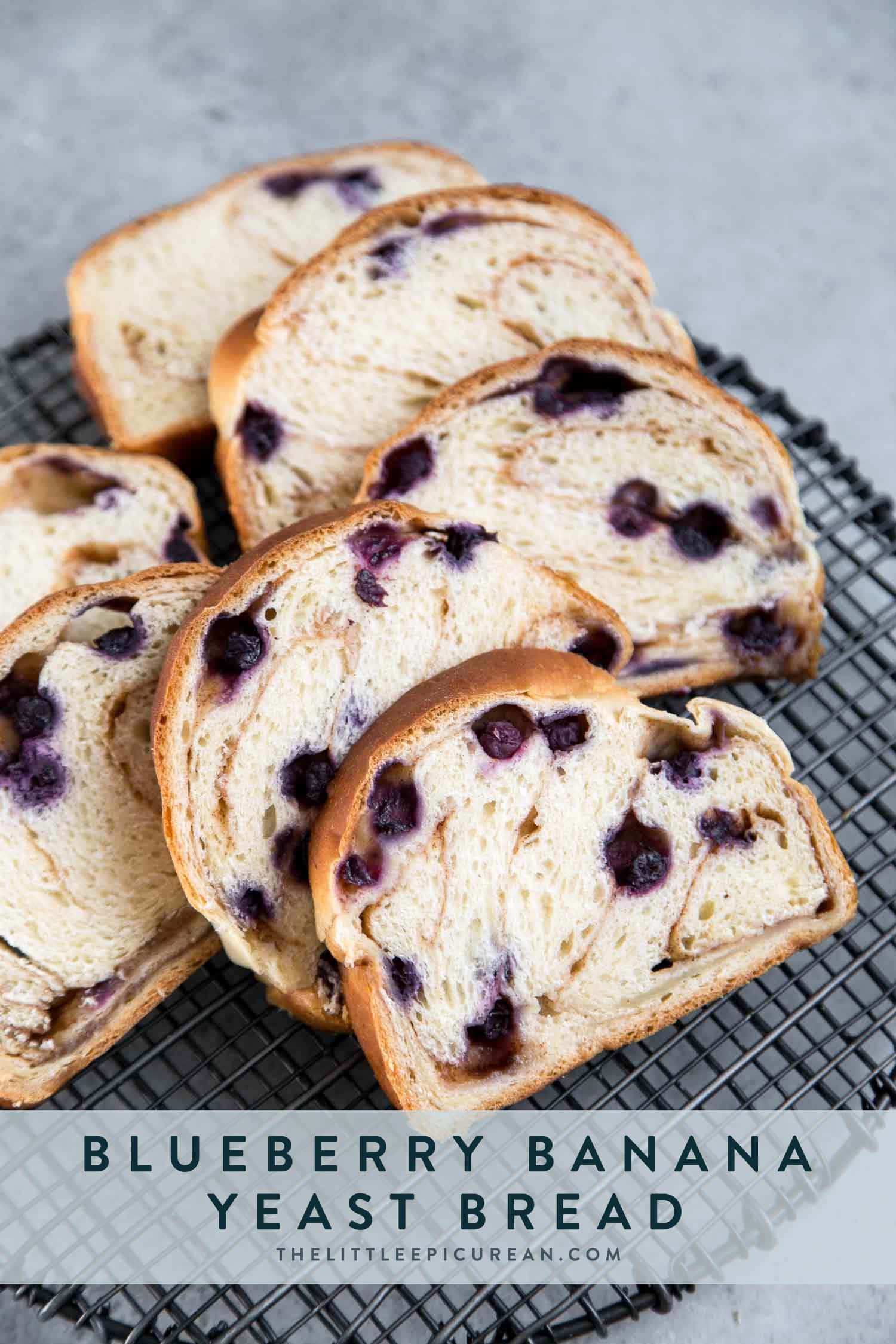 When overripe bananas have overstayed their welcome on the kitchen counter, I instinctually make banana bread.

Nothing fancy. Just your regular banana bread loaded with sugar and brown sugar.

Let’s break that habit and try something a little different…with far less sugar!

Have you ever made banana bread leavened with yeast? Me, neither. That is, until I started testing the recipe for this blueberry banana yeast bread. 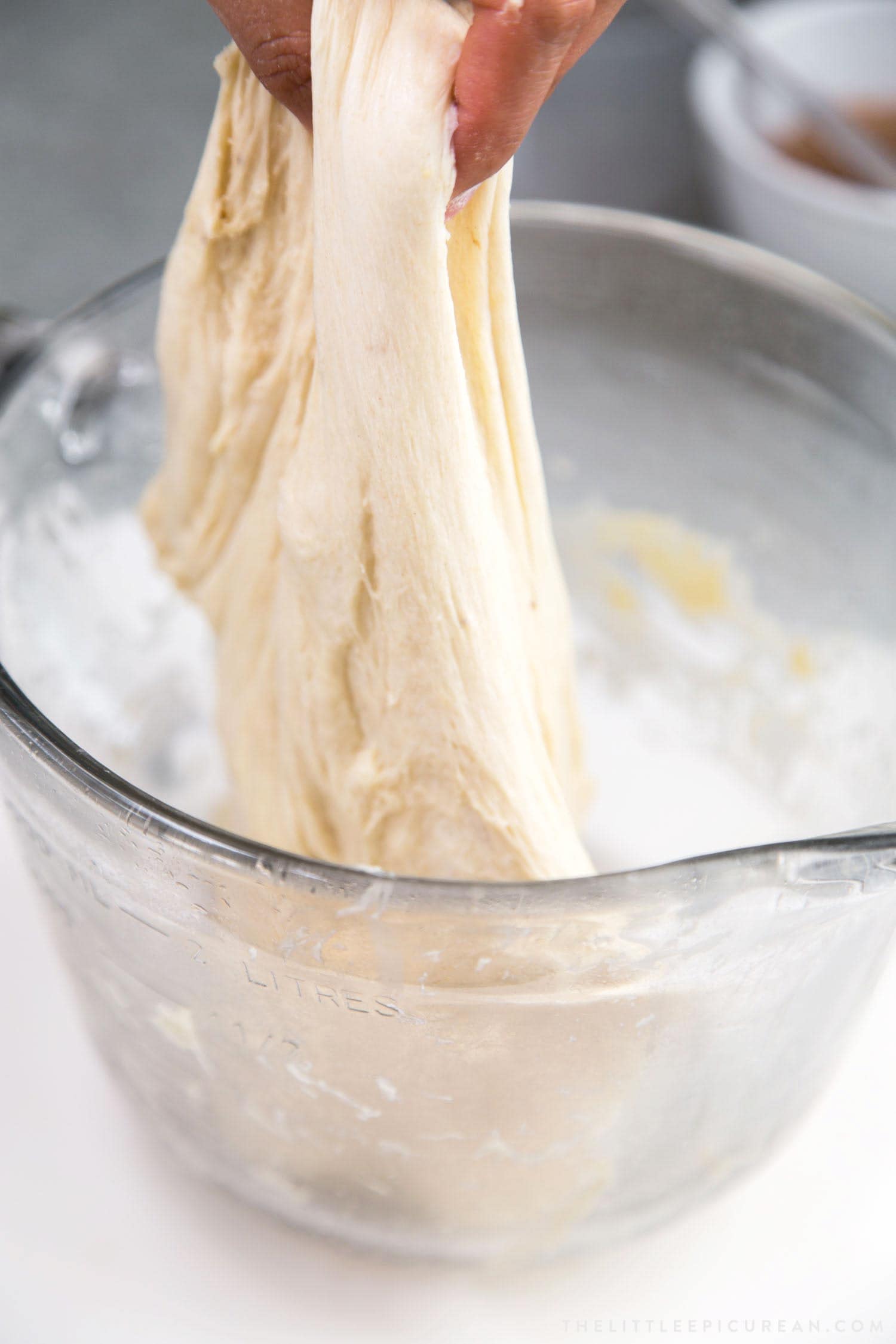 This yeast dough is very soft and stretchy!

Please follow the amounts listed in the directions. You may be tempted to add additional flour because the dough may seem “wet” as it mixes.

It may be a “wet” dough but can be easily scraped from the mixing bowl with the help of a spatula or bowl scraper.

Lightly flour your hands and work surface, if the dough is sticking.

Afraid to work with yeast?

Active dry yeast needs to be dissolved and re-activated in warm liquid before mixing. Ideally, you want the liquid between 100-115 degrees F.

TIPS WHEN WORKING WITH YEAST DOUGH:

How to shape and roll banana yeast bread:

Working with one portion of dough at a time, roll dough out to 12 x 16-inch rectangle. Sprinkle cinnamon sugar over surface of dough. Top with frozen blueberries.

Beginning at the longer end, roll dough into a tight log. Slice log in half lengthwise. Pinch end seams shut.

Stretch each log to a length of about 8-inches.  Twist the two logs the dough over each other to form a spiral.

Now, place that formed bread loaf in a bread pan and repeat process with the second portion of dough! 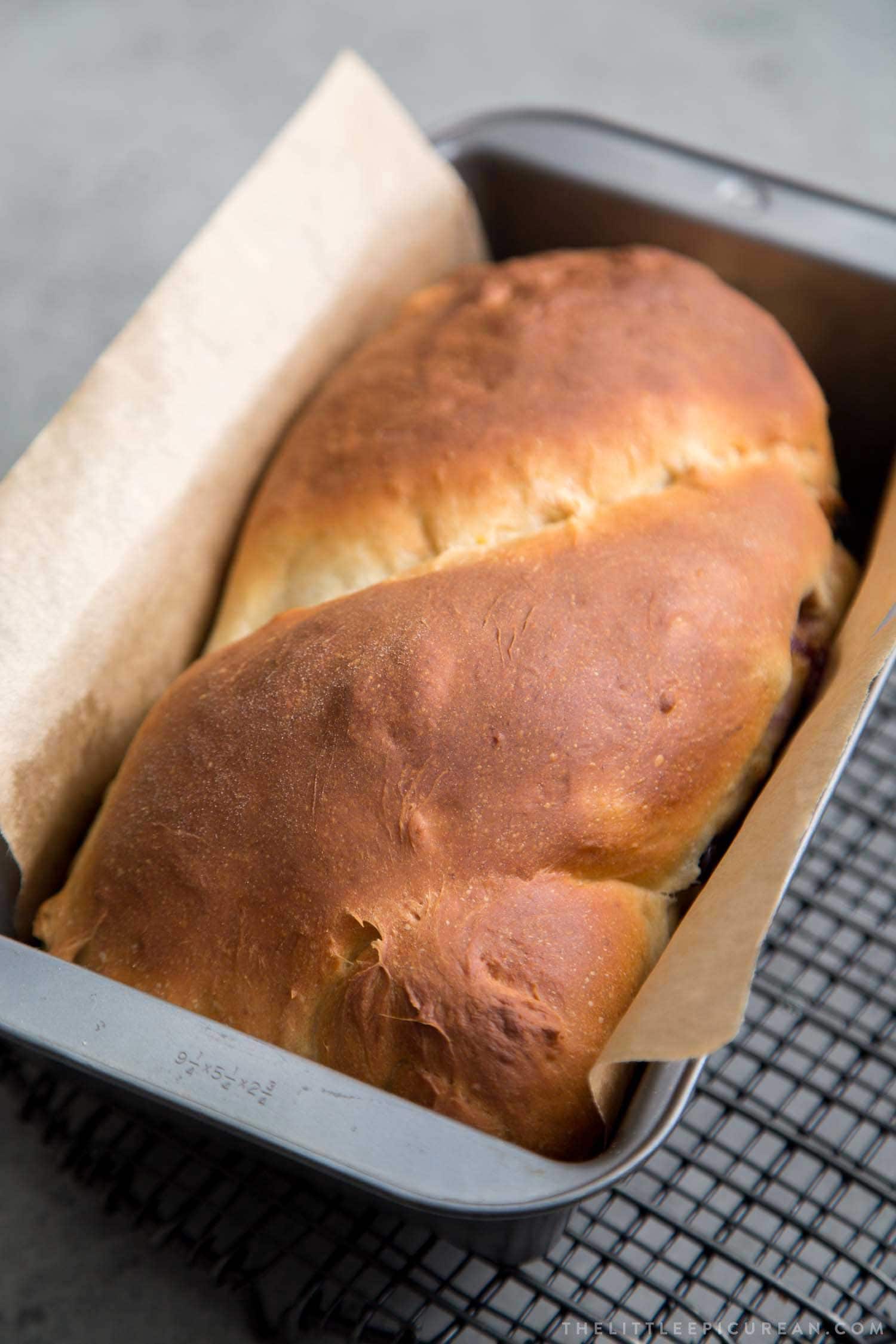 Why use frozen blueberries?

In my experience, frozen berries are easier to roll into breads. No worrying about crushing or exploding berries.

The frozen blueberries are much sturdier and retrain their shape even after baking. That being said, fresh blueberries may be used in this recipe as well. 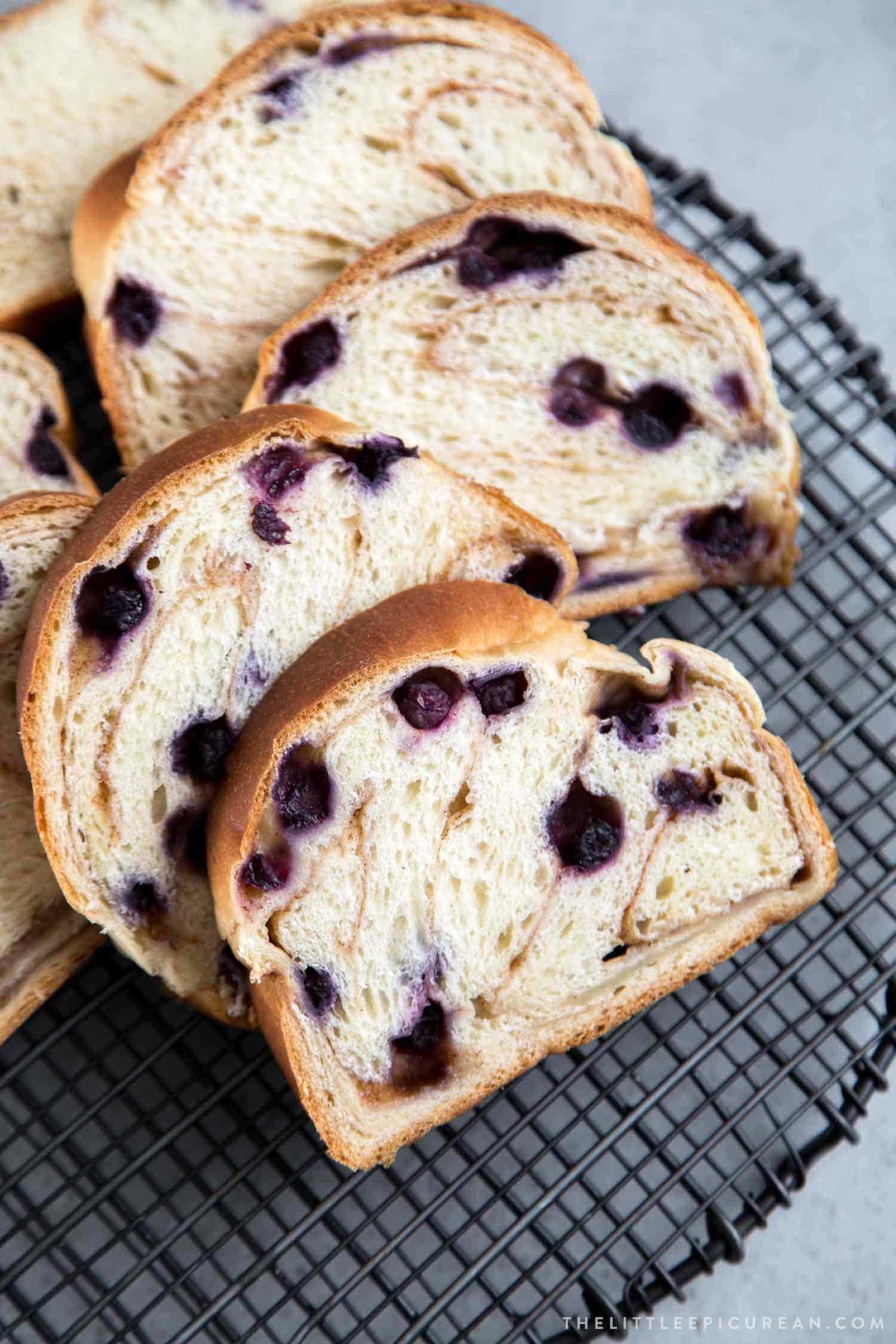 Since this recipe makes two loaves, eat one now and save the other for another project! Once the second loaf starts to get stale, give it a second life as Blueberry Banana French Toast!