Four layers of banana cake filled with tahini buttercream and enrobed in dark chocolate. This tahini chocolate banana cake is in honor of my late father’s 72nd birthday.

As you read this post, I am on a plane en route to Japan. YES. JAPAN! It’s been 9 years since the last time I was in Japan. I spent my last semester of undergrad studying in Tokyo. To say I had an amazing, life changing, magical time would be an understatement.

I’ll be spending a week in Nagoya and the neighboring beautiful countrysides, followed by a super quick two day stint in Tokyo (mainly to relive and reminisce about my college years and also stock up on Kit-Kats, face products, and cute stationary/pens).

Naturally this trip will involve LOTS of food and drinks. Follow along on Snapchat (username: LittleEpicurean) and Instagram to see what I’m up to!

Now, back to this cake.

Tahini (sesame seed paste) is having a moment in my kitchen. I am obsessed with it. Tahini is very nutty, quite bitter, and super savory. It’s mainly used in Middle Eastern and Mediterranean cooking, primarily for savory foods. Think hummus and baba ghanoush.

I’ve had a jar of tahini sitting in my pantry staring at me for the past two weeks. Finally I took the plunge and used it in cookies.

These tahini chocolate chunk cookies are INSANE and delicious. Success from the cookies, led to the tahini buttercream in this cake.

For as long as I can remember, I’ve always made my dad something for his birthday: crayon drawn greeting cards, keychains made with beads, hand-painted cookie jars.

As my interest in baking flourished, I made him cinnamon rolls, banana cake, and ice cream for his birthdays.

This year is no different. I’m still going to celebrate and honor his life. Ever the adventurous eater, my dad would have LOVED this cake.

He probably wouldn’t have guessed the tahini part or the even the banana cake for that matter, but he would have devoured it and asked for a second slice.

As he got older, all desserts just tasted “sweet.” He didn’t bother distinguishing the flavors, rather he simply enjoyed everything without questioning it.

That’s how he pretty much treated life as well. Instead of knit-picking every tiny detail (like OCD me), towards the end of his life, he just let everything be.

Though it’s been almost 5 months, it often feels like it just happened yesterday. Once in a while (especially at nights), my heart still aches and my eyes still swell up when I remember the little things.

And sometimes, when my phone rings a part of me still hopes that it’s him at the other end of the line calling to tell me that a package was delivered for me at their house.

More than anything, I feel so blessed and so unbelievably lucky to have been by his side when he took his last breath.

What this cake means to me:

This tahini chocolate banana cake symbolizes everything my dad was. On the outside, it seems like a regular chocolate cake. But when you cut a slice, you’re immediately wowed by the different layers and textures inside.

And when when you take a bite and finally taste the combination of all the flavors, you can’t help but smile and dig in for another.

On the outside, my dad was plain. He liked to wear the same clothes (despite the fact that his closet was overflowing with new outfits my mom had picked out for him).

It was always a polo shirt (or the occasional button down shirt) tucked into a pair of jeans. From the outside, he blend right into a crowd.

But once he allowed you to see a glimpse of the inside, you knew right away that he was far from ordinary.

Sweet banana cake coated with rich and exotic tahini buttercream and studded with chocolate chunks. It’s a mixture of familiar and unknown. This tahini chocolate banana cake is comfortable yet exciting.

He was many things before I was born. He was a son, a brother, a husband. While I can never attest to those years before me, I can only vouch for him as my dad.

I’ll never know the man that my mom knew before they had children, or the son that my grandmother knew when he was growing up.

I knew him as simply as my father, and to me, he was the best. 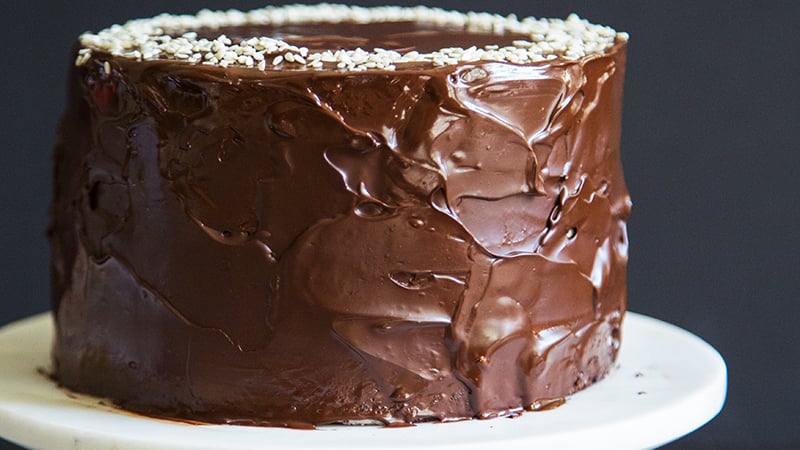 If consistency of buttercream is too thick, add 1 tablespoon of milk at a time until desired consistency is achieved. If buttercream is too thin, add confectioners’ sugar 2 tablespoons at a time.
Author: Maryanne Cabrera
Course: Dessert
Cuisine: American
Keyword: chocolate banana cake, tahini banana cake, banana layer cake, tahini buttercream
Did you make this recipe?Show us on Instagram! Tag @littleepicurean and hashtag #littleepicurean. 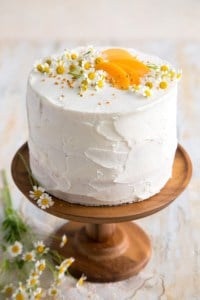 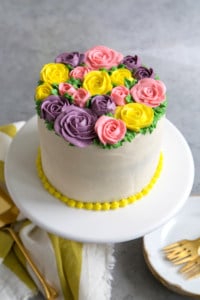 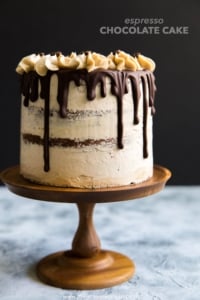 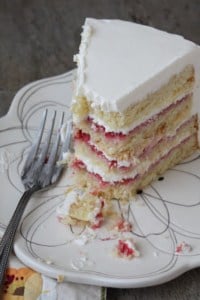