Apple cinnamon rolls are an autumn variation of the classic cinnamon roll. The dough is made with apple cider for extra flavor while the filling is packed with cinnamon spiced apples!

Cinnamon rolls hold a special place in my favorite. They were my late father’s favorite baked treat.

These simple classic cinnamon rolls were his most requested recipe.

Over the years, I’ve made all sorts of different variations:

Here’s another one to add to the list: apple cinnamon rolls with spiced cream cheese frosting!

What makes these rolls better than those other apple cinnamon rolls recipes?

The dough is made with apple cider!

Most dough recipes use water, milk, or a mixture of the two.

Instead of water, this recipe uses apple cider. This simple change adds just a hint of sweetness and more flavor.

Do not use sparkling apple cider (such as Martinelli’s sparkling cider). That is a completely different product!

The labeling of “apple cider” versus “apple juice” varies from state to state. The apple cider used in this recipe refers to unfiltered apple juice.

This apple cider (unfiltered apple juice) is a bit cloudier and thicker than your standard boxed apple juice.

REMEMBER: apple cider should only have ONE INGREDIENT- apples!

The dough is simple and straightforward to make. It be made with a stand mixer using a dough hook attachment, or it can be mixed and kneaded together by hand with a little extra effort.

The enriched dough is spiced with a mixture of nutmeg and cinnamon. It adds a touch of extra warmth and flavor.

It’s up to you whether you want to peel the Granny Smith apples or keep the skin on.

I prefer to keep the peel on. I like the flavor and texture it adds.

Simply the apple into small bite sized pieces. Then, toss with apple cider, salt, and cinnamon.

Spread softened butter all over the rolled dough. Sprinkle cinnamon sugar on top.

Strain the liquid from the chopped apple mixture and serve for later. Distribute the strained apples all over the cinnamon sugar.

Can you use any apple variety?

I used chopped Granny Smith apples for the filling. I’ve tried this recipe with other apples, but they don’t hold up as well.

The durability and tartness of the Granny Smith works well with the brown sugar and cinnamon filling.

You will want to make extra of this spiced cream cheese. It’s wonderful on cinnamon raisin bagels or spread onto on Japanese milk bread toast!

Dough can be prepared ahead of time and stored in the fridge overnight.

Follow the steps in the instructions up to step #7. Place the cut rolls in greased baking pan. Then, cover with plastic wrap and keep chilled in the fridge overnight.

Before baking, keep rolls out at room temperature to warm up and reactivate the yeast (about 30 minutes). Bake as directed.

These apple cinnamon rolls are best fresh from the oven.

However, they’re also delicious cooled to room temperature and even cold straight form the fridge!

No matter how you choose to eat them, they’ll definitely be delightful. 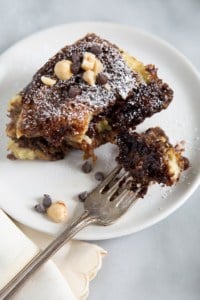 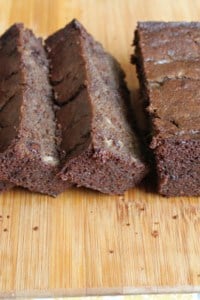 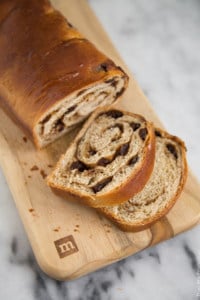 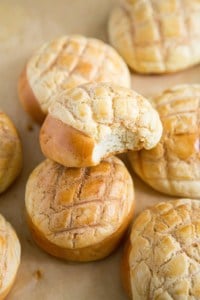