No bake Greek Yogurt Cheesecake is made with a gingersnap cookie crust and topped with candied lemon slices.

Did you ever make those Jell-O No-Bake Real Cheesecake mixes growing up?

Traditional cheesecake is very time consuming. It is gently baked in a water bath, allowed to cool to room temperature, and then chilled for a few hours until it’s finally ready to slice into.

This no bake cheesecake is super easy to make.

With the help of a food processor, this cheesecake is whipped together in a breeze.

The filling for this no bake cheesecake is made from a mixture of cream cheese, Greek yogurt, sour cream, and gelatin. Yes, this cheesecake contains gelatin.

It is what makes jello jiggle, panna cotta set, and what keeps mousse stable. Gelatin is derived from animal collagen, usually from a combination of pork skin, cartilage, and bones.

Gelatin is most commonly sold in dried powder form. However, it is also sold as gelatin sheets, which can be found at speciality baking stores.

There are vegan gelatin alternatives available as well. Agar (also known as agar-agar) is widely used in Asian desserts. It is made from algae. Carrageenan is another option, which is derived from dried seaweed.

Why add gelatin to no bake cheesecake?

Traditional cheesecake is made with eggs. Egg yolks contain lecithin, a natural emulsifier. As such, the egg yolks act as a binder, ensuring the homogenous mixing of ingredients.

Lecithin stabilizers the ingredients, allowing the liquids and fats to stay glued together. It helps to “set” the mixture.

Since this no bake Greek yogurt cheesecake contains no eggs, the gelatin acts as the stabilizer. The addition of gelatin gives this cheesecake a creamy, mousse-like texture.

How to use gelatin powder?

Unflavored gelatin packets are available at supermarkets next to Jell-O and pudding products.

How to use gelatin

Gelatin needs to be “bloomed” prior to use.

Gently heat the bloomed gelatin until it dissolves into liquid.

At this point, the liquid gelatin can be mixed with the remaining ingredients. As the gelatin cools, it will solidify.

The recipe still contains a decent amount of full fat cream cheese and a touch of sour cream.

However, to slightly cut back on fat and calories, the addition of 2% Greek yogurt provides a similar creaminess as cream cheese. Plus, it adds protein!

The finished cheesecake is topped with candied lemon slices and a drizzle of lemon syrup from these Meyer lemon ricotta pancakes.

Sliced strawberries or a mixed berry sauce is a great alternative topping.

For a decadent touch, I suggest topping the cheesecake with toasted pecans and maple syrup. 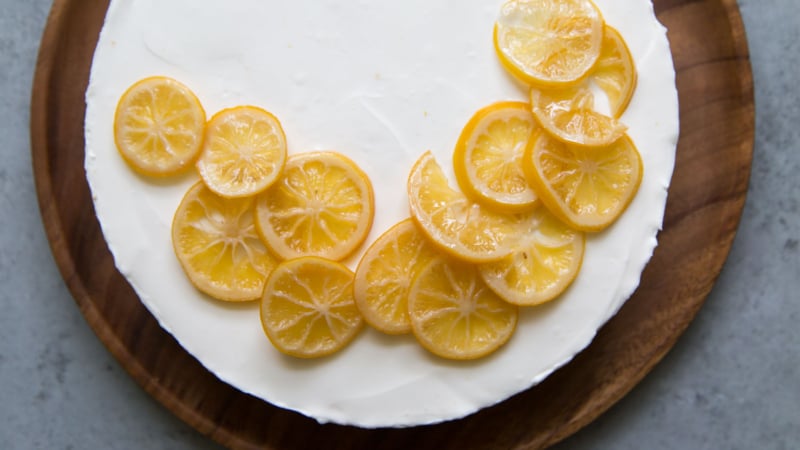 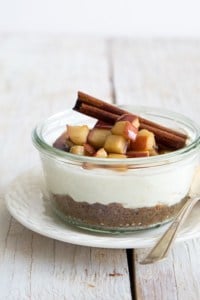 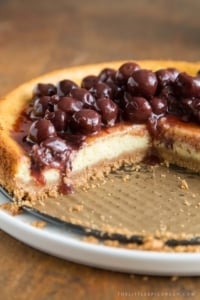 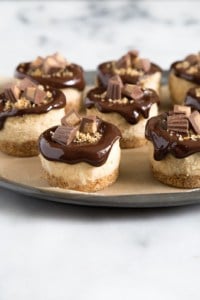