For a sweeter slice, drizzle caramel all over.

Though this cake is comprised of several components, it is simple to make.

Make the buttercream ahead of time to break up prep time.

Pastry cream is cooked stove-top. It is a mixture of milk, egg yolks, and sugar thickened with cornstarch.

This versatile component is used to fill doughnuts and cream puffs, line tarts, and layer parfaits.

If you want even more banana, sub in banana pudding in place of pastry cream.

There are three ways to make meringue: French, Swiss, and Italian.

Swiss meringue is cooked. Melt together egg whites and sugar over a double boiler to 120-160 degrees F. Whip the mixture until room temperature. Then, add butter.

Store in an airtight container in the fridge for up to 3 days. Let sit at room temperature for several hours until mixture has softened.

Revitalize using a sturdy whisk or beat with paddle attachment in stand mixer until smooth, light, and fluffy.

Freeze up for up to two months for even longer storage. Defrost at room temperature.

How to assemble filled cake

Fully assembled 6-inch cake will have four banana cake layers. There will be three layers of sliced banana and pastry cream.

Do not add sliced bananas and pastry cream to the final fourth layer.

The cake photographed above follows the “naked cake” look.

While some argue that naked cakes looks unfinished, I think it’s a great way to showcase more cake and less sweet frosting!

Not a fan of this look? There is plenty of buttercream frosting in the recipe. You may completely cover the cake to hide any layers.

The top of the cake is simply decorated using a buttercream filled piping tip fitted with a star tip.

I highly recommend this 6 piece pastry tip set. It comes with 2 plain round tips as well as three star tips to choose from: open star, French star, and closed star.

Cold cake directly out of the fridge is the easiest to slice into clean portions.

Use a sharp knife to slice cake. Wipe knife clean after each slice.

A 6-inch round layer cake can easily serve 10-12 wedge slices.

Store uncut assembled cake in the fridge for up to two days before slicing.

Alternatively, place cake slices in an airtight container in the fridge.

Sliced cake keeps in the fridge for up to two days.

Overtime, the fresh banana slices will oxidize and turn brown. Though still edible, the color is a bit unappealing.

For the best experience, eat the cake the same day it is assembled.

The cake and buttercream will be dense immediately out of the fridge. 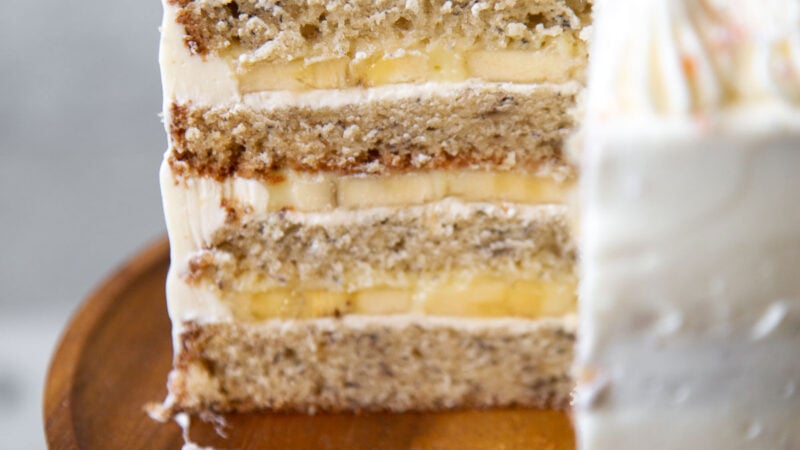 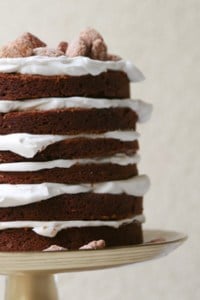 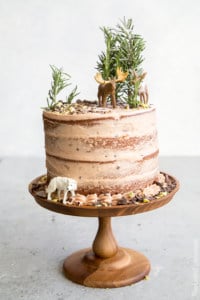 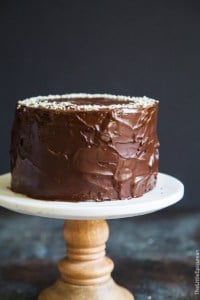 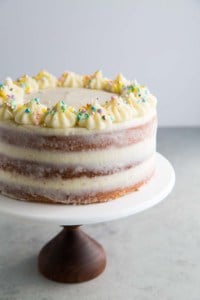