I set about making this cake for my husband’s birthday. We ate a slice of coconut raspberry cake eat for breakfast. Then, spent the entire day being kids at Disneyland.

I have since made the cake several times. It has been an absolute hit with each taster! Even my parents were convinced that I had bought it as fancy Westside bakery.

This is definitely not your average coconut cake.

First of all, it doesn’t have coconut flakes all over the outside, coconut cake’s most distinguishing feature.

Rather than put coconut on the outside, I packed it all on the inside. You could never guess this cake was full of coconut until you taste it, or you take a big whiff of it while it bakes.

If you are interested in a more traditional coconut cake, try these:

For the coconut lovers!

The layer cake is made with coconut milk, coconut oil, and unsweetened dried coconut flakes. If you want to go coconut crazy, you can sub in coconut sugar. I used regular granulated sugar because I wanted to keep the cake white.

When assembling the cake, I soaked the cake layers with simple syrup spiked with a little coconut vodka. Yes, coconut vodka!

It’s this amazingly delicious and tropical vodka that is perfect for summer. I used this one by Ciroc. There are other coconut vodkas out there, but Ciroc makes my favorite one.

To balance out the coconut cake, I added a thin layer of raspberry preserves for a pop of tart flavor and a layer of coconut cream cheese frosting. I’m not one for tons of icing, so I left the outside of the cake unfrosted.

The cake is sweet enough on it’s own. This is one of those instances where less is more.

Finally, the top of the cake is garnished with fresh raspberries and salted pistachios. Pistachios add a nice crunch and pistachio + raspberry + coconut is an excellent combination.

In previous years, I’ve made him a Dodgers baseball cap cake, lemon olive oil cake , and even cheeseburger cupcakes.

Now that his birthday is over… it’s time to plan my birthday cake!

To make simple syrup: bring equal parts water and sugar to a boil. Allow to cool to room temperature. Store in the fridge until ready to use. All images and text © The Little Epicurean
Author: Maryanne Cabrera
Course: Dessert
Cuisine: American
Keyword: coconut cake, raspberry jam cake, coconut layer cake
Did you make this recipe?Show us on Instagram! Tag @littleepicurean and hashtag #littleepicurean. 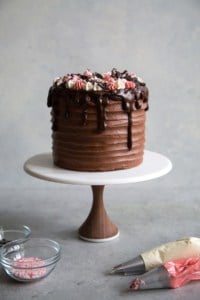 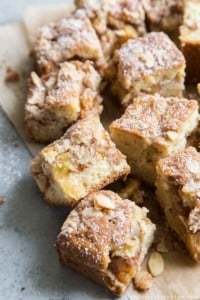 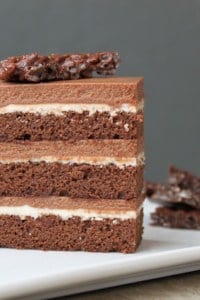