This Oreo cheesecake tart has all the flavor and richness of a standard cheesecake in smaller, shallower scale. 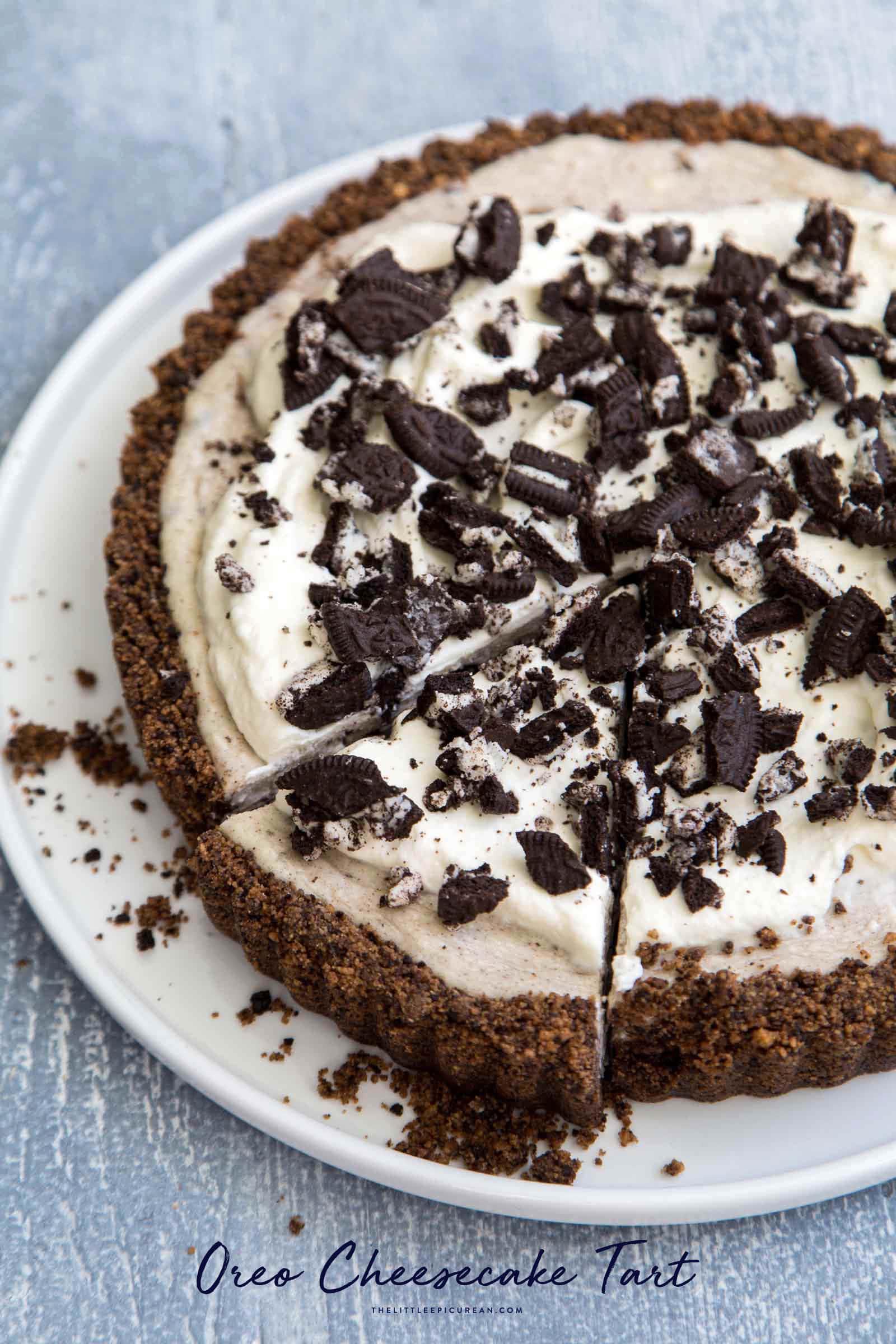 The holidays mean cheesecakes galore! Every holiday gathering I’ve ever attended has at least one cheesecake for sharing.

Whether it’s a giant Costco cheesecake or a vegan tofu cheesecake (because I’m from Los Angeles), cheesecake is an essential player.

To me, nothing beats a slice of tall, rich, and dense New York cheesecake. It’s my kryptonite and unfortunately, it causes major havoc to my waistline.

While this Oreo cheesecake tart is by no means healthy or light- it does provide the same richness as a standard cheesecake but on a smaller scale.

By using a shallow tart shell, I’m able to greatly reduce the amount of cream cheese in the recipe. Best of all, the crust to filling ratio is much better. You get more crust per bite.

A standard 9-inch cheesecake recipe uses at least two pounds of cream cheese and nearly half a dozen eggs. It includes melted butter and sour cream among other delicious ingredients that adds to its heavenly decadence.

This shallow cheesecake only uses one pound of cream cheese, one egg, and half a cup of sour cream.

That’s where any of hint of lightness ends. Because then I add a generous amount of chopped Oreo cookies into the mix! 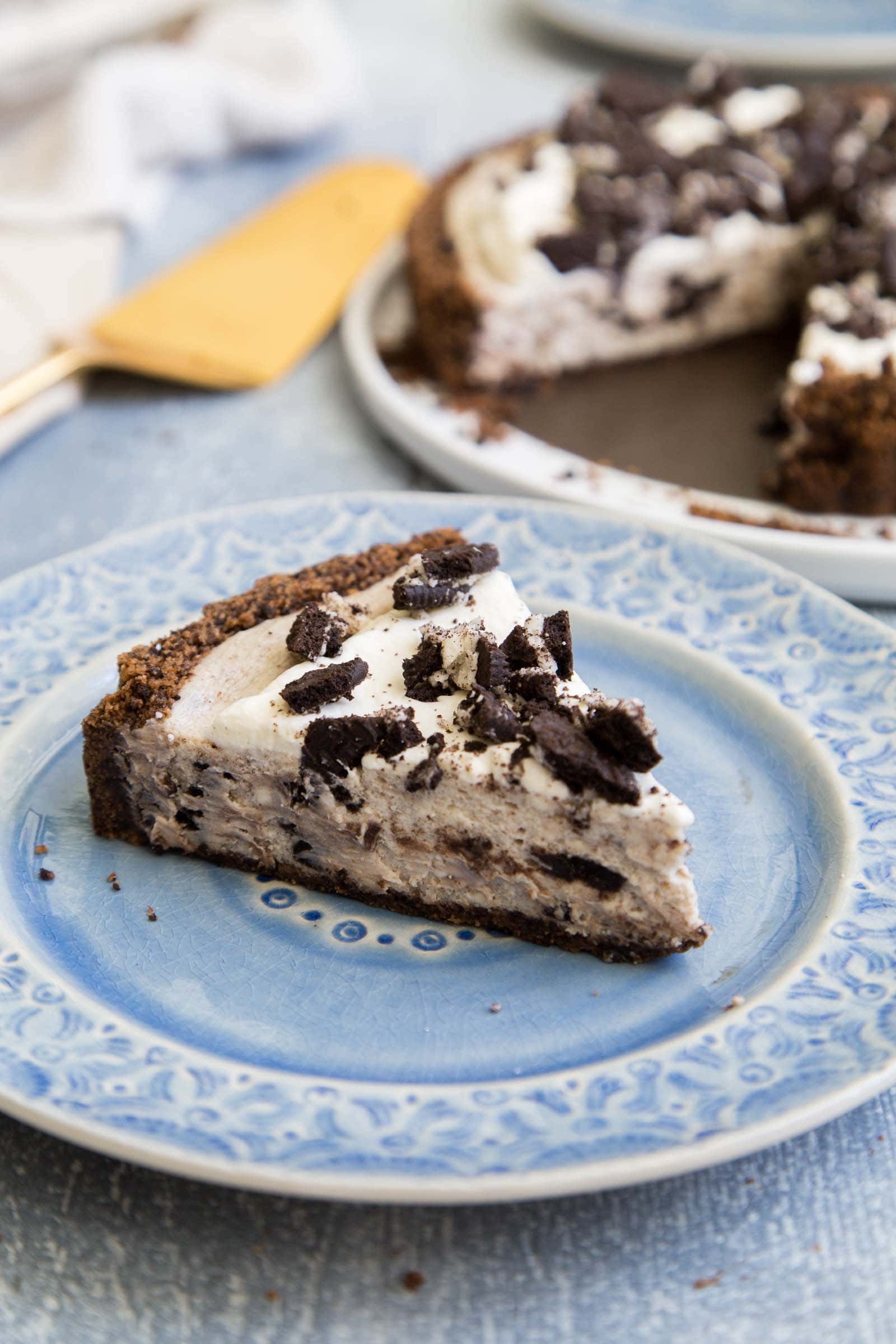 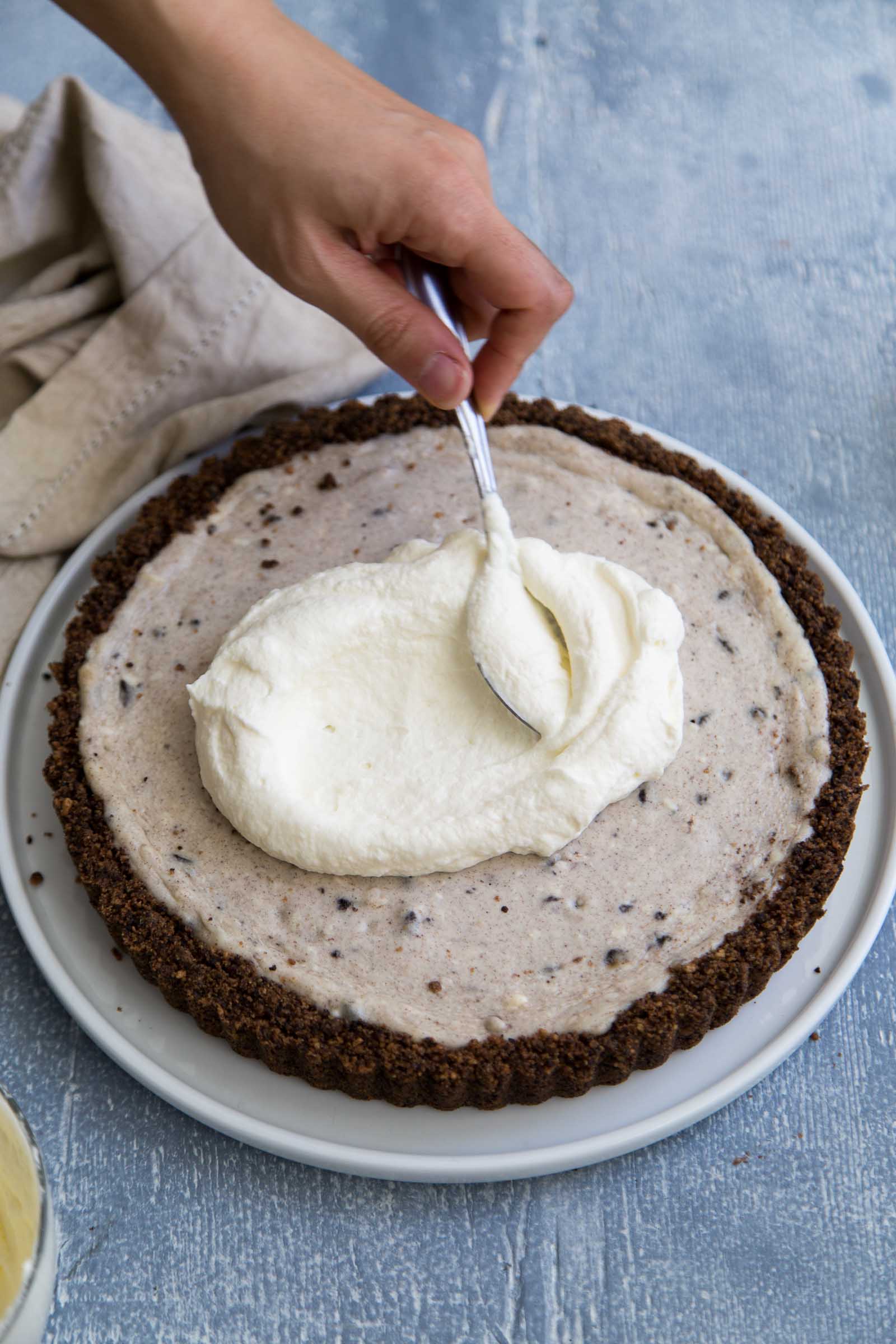 Blend together graham cracker, Oreo cookies, cocoa powder, and salt in the food processor. Stir in butter to moisten crumbs.

Press the crust mixture into a 9-inch tart pan with a removable bottom.

Use an electric hand mixer (or a stand mixer fitted with a paddle attachment) to beat together cream, sour cream, and sugar. Follow with egg, salt, vanilla, and a touch of heavy cream.

Mix until well combined. Then, fold in chopped Oreo cookies.

Spread filling over prepared crust and bake for about half an hour.

Let the cheesecake tart cool in the fridge for a few hours before serving.

Then, spread fresh whipped cream over the tart and garnish with all the chopped Oreos your heart desires! 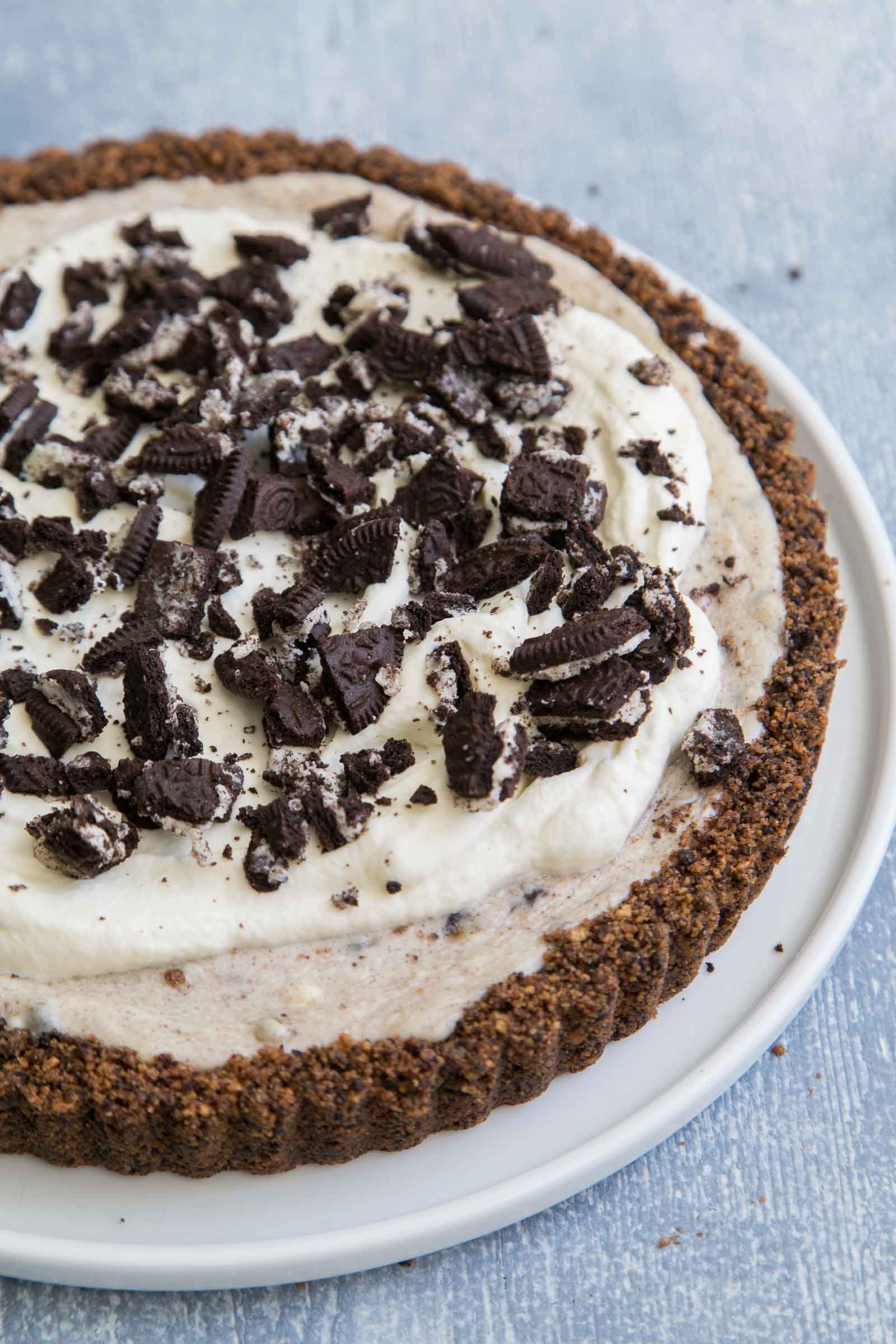 Every time they come out with a new flavor, you bet I’m buying a package. But of course I’ll always be partial to the original.

This Oreo cheesecake tart includes Oreo cookies in the crust, filling, and topping. The crust is a mixture of graham crackers, Oreo cookies, and touch of cocoa powder. It tastes wonderful on it’s own and I could eat the crust by the spoonful. 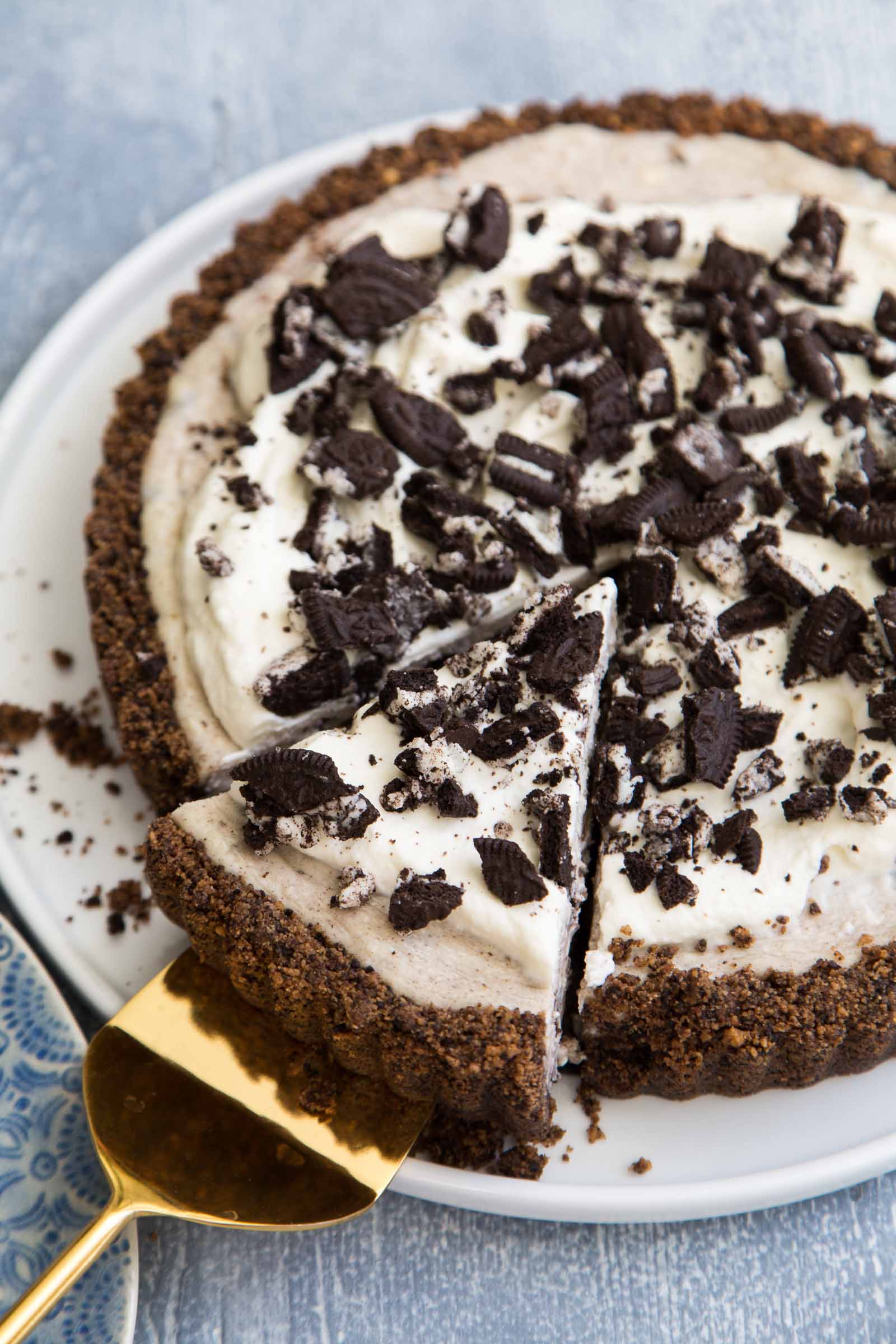 I use full-fat cream cheese and full-fat sour cream in all baked goods. I’d rather use the good stuff.

Unfortunately, I haven’t had much luck baking with low-fat cream cheese or low-fat sour cream. The added moisture in these products throws the balance off.

Let’s face it, about 80 percent of the recipes I share are sweet. I make desserts daily. And yes, I taste everything and often test each recipe at least three times to ensure its viability. And because of all the sweet things that come out of my kitchen, I’m all about moderation.

I won’t deny myself dessert, but I rely heavily on portion control. I’ll slice myself a tiny little wedge. I’ll eat it super slowly and savor each little morsel. And then I’m done. I’ll package the rest and send them away to make others happy.

These Oreo cheesecake tart will definitely spread cheer and joy. 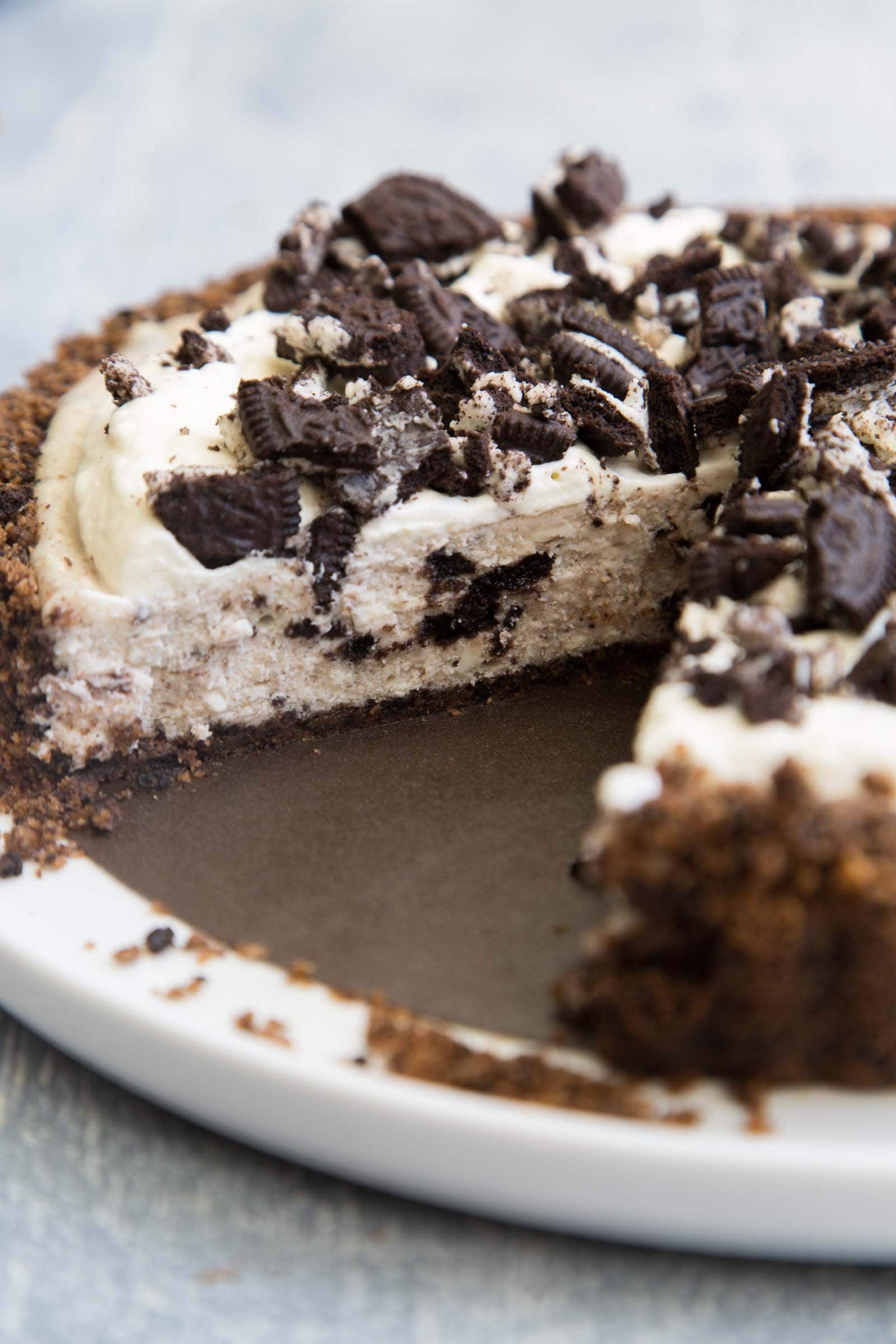 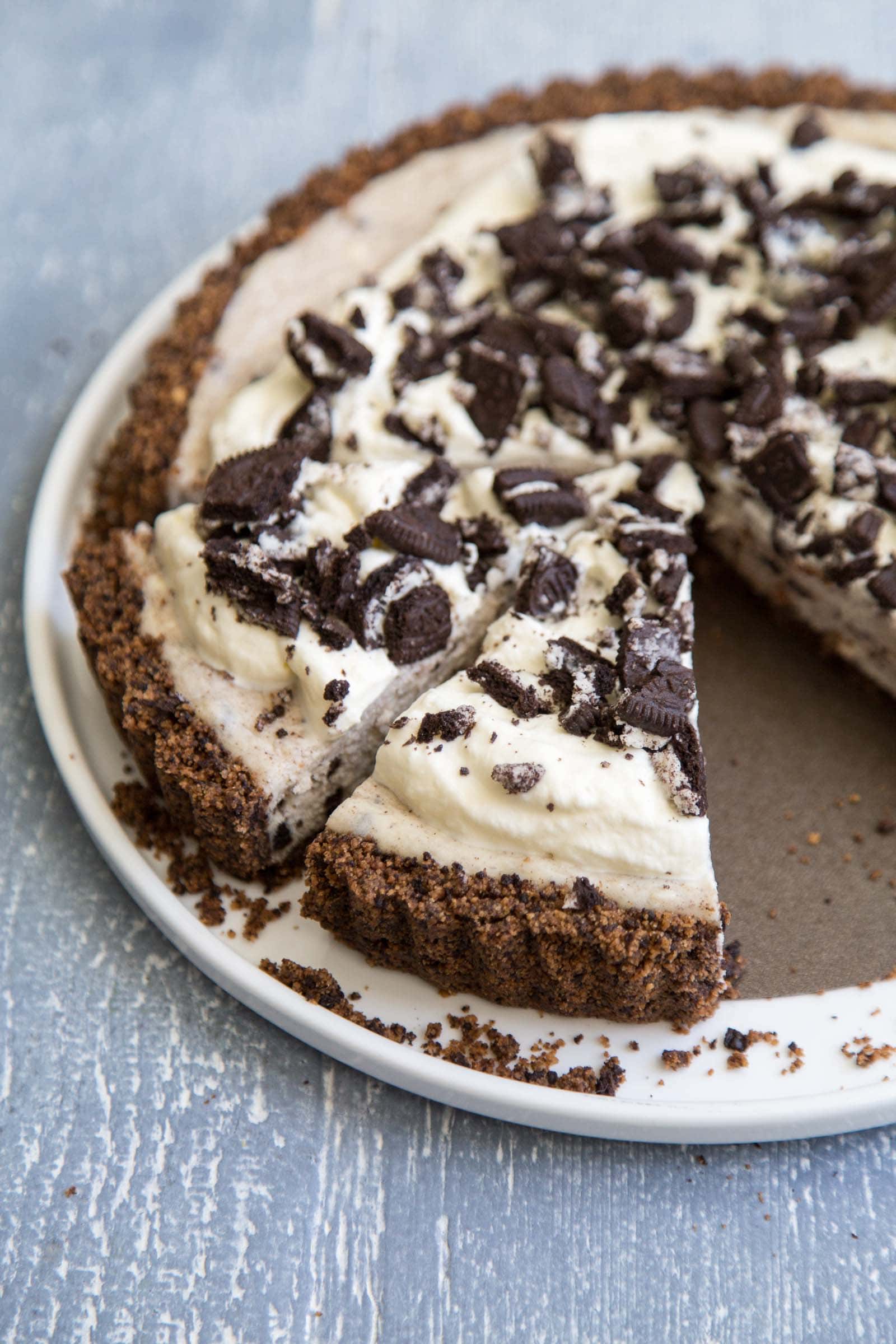 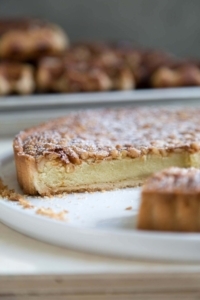 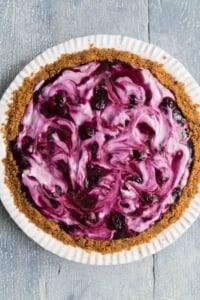 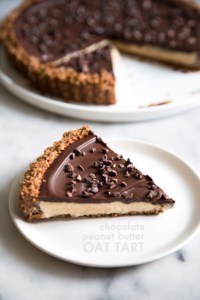 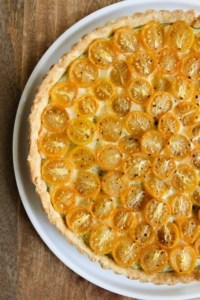