Peanut Butter Apple Pupcake is perfect treat for celebrating your dog’s birthday. It’s made with applesauce cake and frosted with peanut butter. Top it with your pup’s favorite biscuit treat! 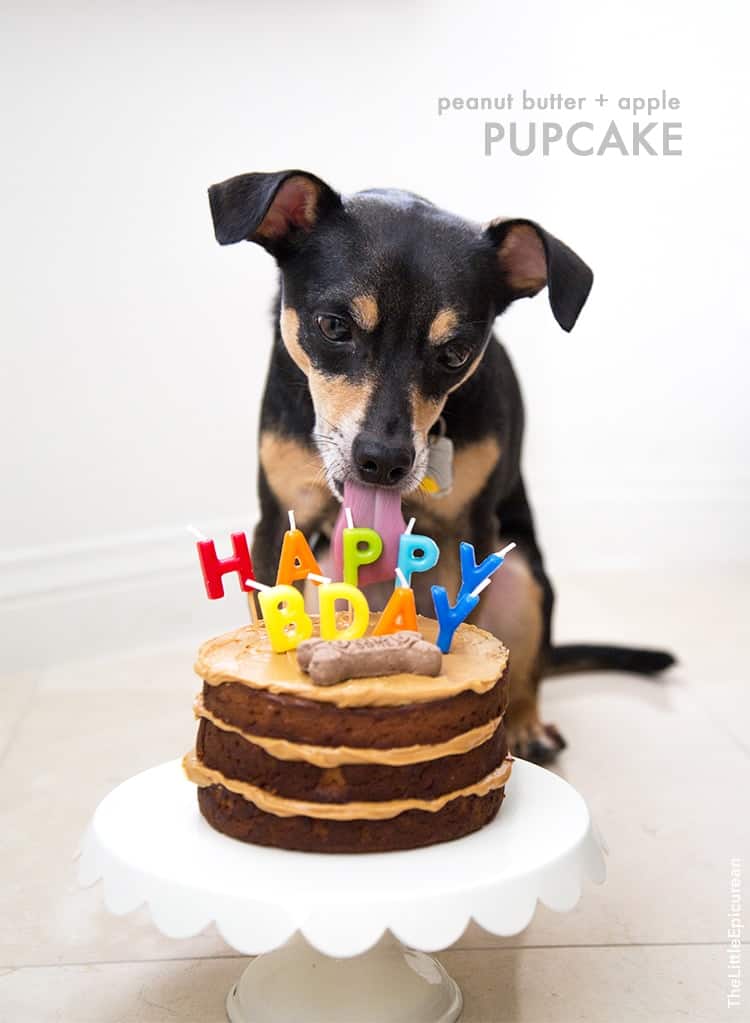 Ten years (heck, even 5 years) ago, none of my friends or family would ever believe that I’d have a dog. It’s not that I didn’t like dogs. I love animals. I just never had the time or wanted to deal with the responsibilities (and mess) of caring for a pup.

Fast forward to present time and I have two dogs. And honestly, I can’t imagine a life without Charlie or Taylor.

Before meeting Charlie, I had spent a great deal of time visiting local shelters and scanning pet adoption websites. I had met other pups, thought they were extremely cute, I never felt any connection with them.

And then I met Charlie. I immediately knew he was meant to be part of my family.

I found Charlie through Cuddly Canines, a non-profit rescue organization serving LA/OC counties. Cuddly Canines was hosting an adoption fair at a nearby Petsmart.

There was at least 15 pups of all ages there. They all were super energetic, jumped, barked and played with one another…expect little Charlie (then named Hobbs).

He was the smallest dog there and he was tucked in the corner sleeping soundly. I was told that Charlie was a solo orphan that was dropped off at a local shelter. Luckily the foster family that cared for him had a new beagle mom that took Charlie in.

We’re not really sure the exact date Charlie was born, but it was sometime in early July. As a result, we’ve always celebrated the first weekend of July.

This past Saturday (4th of July!) we threw a paw-ty for Charlie’s 4th birthday and served him this peanut butter apple pupcake! 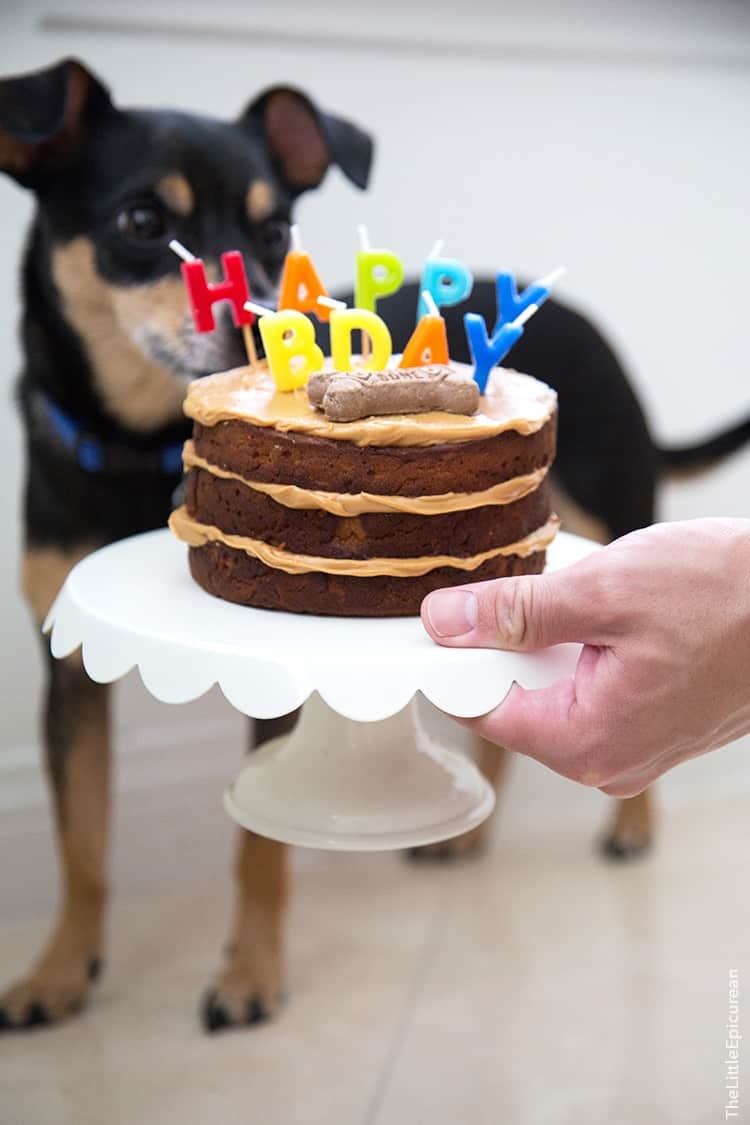 Charlie brings so much happiness and joy to my family. He is super sweet and polite. Unless you hit the doorbell or knock on the front door, then a completely different dog emerges.

Whenever I’m reading a sad book or watching drama on tv, as soon as I start sniffling or tearing up, Charlie immediately tucks himself under my arm and begins licking my face.

He’s so caring. Even when it comes to sharing his toys/crate/treats with Taylor, he’s always willing to oblige. 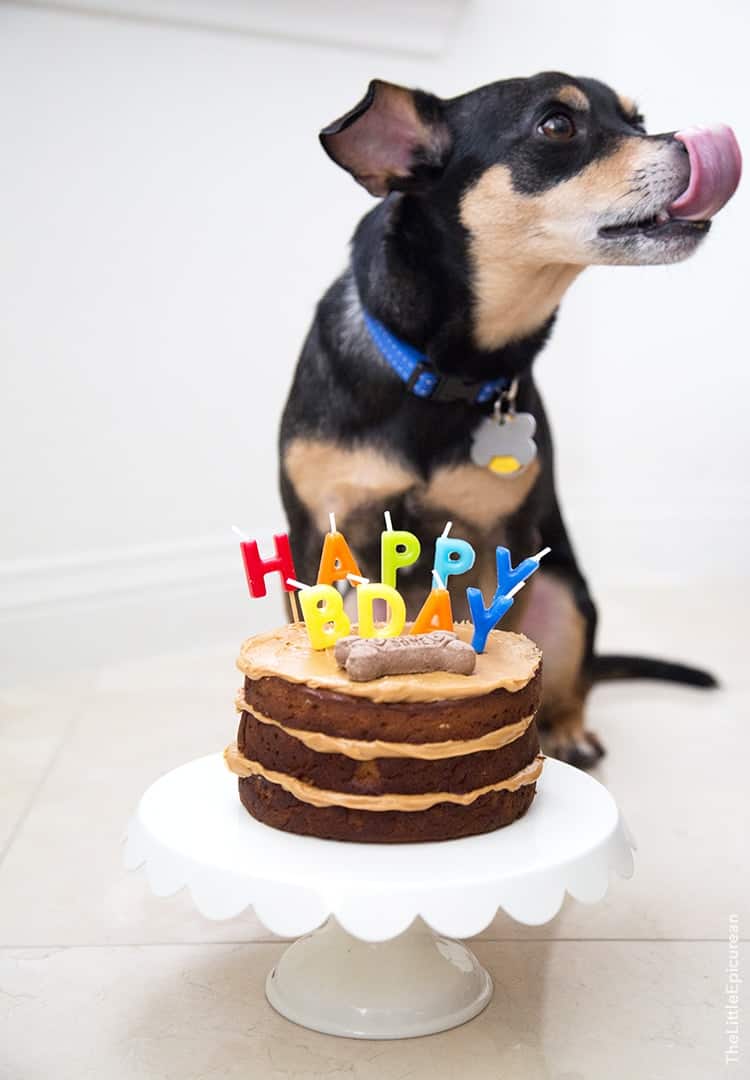 Charlie is also the world’s pickiest eater. Partly because my mom always cooks him special no-salt chicken breast with freshly steamed rice whenever he sleeps over.

That and the fact that Charlie knows if he holds out long enough, my dad and brother will cave in and give him treats galore.

Happiest of birthdays my dear Charlie! Here’s to many, many, many more!

This is a very large and rich cake for small dogs. If possible, use unsweetened and unsalted smooth peanut butter. I served Charlie and Taylor a very small slice each. It's quite decadent. Humans can obviously eat this cake as well...it just doesn't have the sweetness humans associate with cake and treats. 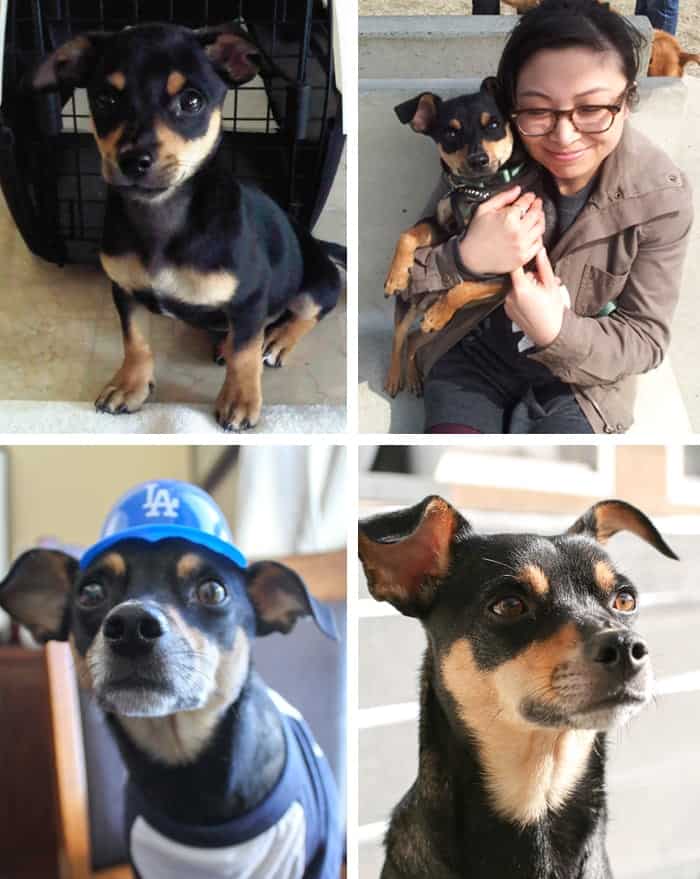 Charlie over the years! The top photo on the left hand corner was taken the first day we took Charlie home in 2011. He was this tiny little puppy, about 10 weeks old and a just a tad bit under 4 pounds.

Four years later (and three moves later), Charlie is this super loving, sun-worshipping, model-posing, adorable dog. He’s also much heavier at 16 pounds… however, his pal Taylor who isn’t even one year old yet has already surpassed him in weight! (Taylor turns one in September! Eek, I gotta make another pupcake!)